The King James Bible, often referred to as the “authorised version”, is one of the most widely read and influential books in history. Published for the first time in 1611 at the behest of King James I of England, the translation was the work of more than 40 scholars, who started from the original Hebrew and Greek texts of the Bible.

Because of the Bible’s fame, people might be surprised to hear that it is still possible to find previously unknown and unidentified sources that shed light on how it came together. In fact, the process of translation remains mysterious – and there is plenty of work left to be done on how this was done. This reflects the wider possibilities of research into pre-modern literature and history – and there is still a huge amount to find out through archival research.

Over the past few years, I have been researching new evidence about how the bible was translated and have identified three new pieces of evidence that had been written by the King James translators in the course of their work. Before that, scholars had only found four: a copy of an earlier English translation, parts of which were apparently revised by some of the translators; an anonymous draft of part of the New Testament; a set of notes on part of the Apocrypha by the translator Samuel Ward; and notes on the New Testament by another translator, John Bois. Nothing had been added to these sources since the 1970s.


My work brings the total number of sources from four up to seven. But what are the three new items? The first thing that links the three items is that they were not accurately catalogued. The first was a printed copy of the Old Testament in the Bodleian Libraries in Oxford, annotated heavily by Bois, a linguist of whom it is said he could “write Hebrew with an elegant hand” by the age of six. 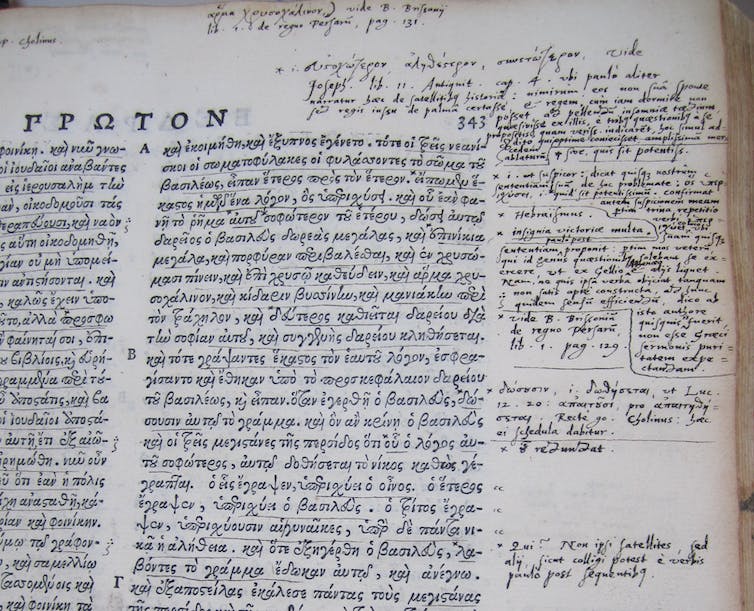 John Bois’s annotated copy of the Greek Old Testament. Photo Nicholas Hardy, courtesy of the Bodleian Libraries, University of Oxford; Bodleian Library, D 1.14 Th.Seld., p. 343
But although the sub-collection this book belongs to has been in Oxford for centuries, it still has not been catalogued to modern standards.

The information available for each book is basic – in this case, the catalogue entry did not reveal that the book contained annotations, much less that they were by a well-known biblical translator. It is one of hundreds of thousands of early printed books all over the world that scholars still have to inspect in person in order to find out what they contain. 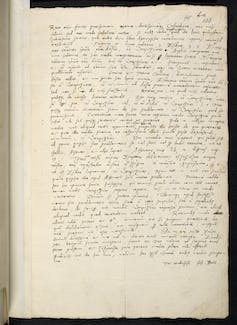 Correspondence between John Bois and Isaac Casaubon about the King James Apocrypha. © British Library Board; MS Burney 363, fol. 103r, Author provided
The same is true of the second and third items I found. The second was a set of handwritten letters exchanged between Bois and the celebrated French scholar, Isaac Casaubon – who had arrived in England in 1610 at the behest of James I and who also participated in the translation. These letters have been in the British Library for about two centuries, but the catalogue says nothing about them other than the names of the correspondents.

The third item was a series of notes in the Bodleian Libraries which Casaubon made after discussing various problems of translation with another translator, Andrew Downes, a professor of Greek at Cambridge University.

Similarly, the notebook containing this record of the translation has a catalogue entry, but it is patchy, imprecise and does not capture the required level of detail. Again, there are thousands of partially catalogued manuscripts all over the world that stand ready to yield secrets like these to researchers who are willing to take a punt and consult them directly.


The next factor that links all three discoveries might surprise readers who think of the King James Bible as a distinctively “English” cultural product: they were all written in Latin, and they all involved some sort of foreign as well as English input. The printed edition of the Old Testament which Bois annotated had been published in Rome and Bois and Casaubon corresponded with each other in Latin. Casaubon’s conversations with Downes, similarly, were held and recorded in Latin, because Casaubon could not speak or write English. 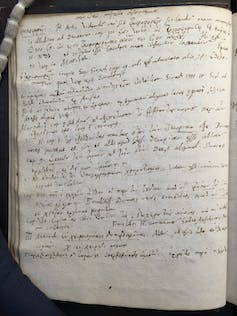 Isaac Casaubon’s notes on his conversations with Andrew Downes about the King James Apocrypha and New Testament. Photo Nicholas Hardy, courtesy of the Bodleian Libraries, University of Oxford; MS Casaubon 28, fol. 4v, Author provided
Latin was the closest thing Europe had to a common language at the time, especially for its intellectual elites. Because comparatively few scholars of this period can read Latin, even a little knowledge of the language can open many different doors to unknown dimensions of early modern culture.


One thing is even more important than access to under-catalogued collections or material in unfamiliar languages, however. I needed a reason to do this research in the first place. In my case, there were two overarching motivations for my work on the King James Bible.

I wanted to show that Christian readers of the Bible in the early modern period were at the cutting edge of intellectual culture and were capable of seeing their sacred texts as historically and culturally specific documents. The sources I found illustrate how and why they could do this, as another commentator has already observed.

Second, I wanted to unpick the commonplace notion that the King James Bible, like other translations of the Bible into English from this period, was a product of a newly independent, assertive national literary culture: the culture of writers like Shakespeare, to take the most famous contemporary example. It may have come to look this way in subsequent centuries, but at the time it bore witness to constant cooperation and exchange between English and continental scholars.

The vast majority of researchers in my field are like me: they don’t enjoy the task of wading through library catalogues or reading Latin manuscripts for its own sake. The reason they do those things in the first place is to test and critique the grander narratives which we tell each other about the past.

This article was originally published on The Conversation

1
Things Fall Apart: A Chronicle of Cultural Collision
2
A Canonical Township Tale
3
Bestsellers Top 5
4
The Historian Who Can Help Us All Make Sense Of The Mess The World’s In
5
Lupita Nyong’o Unveils Cover Of Upcoming Book, Sulwe
© 2020 Joburg Post